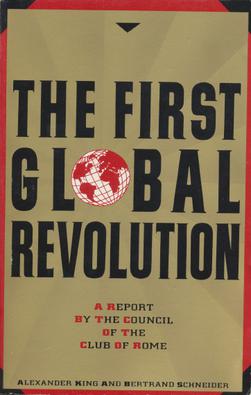 IV. As Russia continues to attempt to pull Ukraine into her Supernation #5, of the Club of Rome Plan, the much-aligned Ruble might be Putin’s secret weapon.

Who said that Russia was so nearly bankrupt from Western Sanctions that she might collapse?

“As a wobbly cease-fire keeps eastern Ukraine’s warring factions apart, Russia’s ruble is conquering new territory across the breakaway republics. In Donetsk, the conflict zone’s biggest city, supermarkets have opened ruble-only checkout counters to serve the fighters in camouflage lining up along pensioners. Bus and tram tickets come with a conversion from Ukraine’s hryvnia to the Russian currency. Gas-station workers are paid in rubles … ‘There are no problems in shops, they all accept rubles’ …”

Just six months ago, no-nothing pundits were predicting that Russia was going to be hurt so badly by the combination of Western economic sanctions and falling oil prices that she might just suffer a broadly based economic collapse. She certainly did not possess the currency reserves to last very long.

Then, other predictors predicted that, because of the pressures brought on by economic collapse made a nuclear war between Russia and America almost certain.

Now, we know both predictions were very, very wrong! Russia is acting like a superpower as she forces Ukraine closer to joining the Eurasian Economic Union (EEU), as she continues to carry out her plan to bring a single currency into the EEU and as she continues to play a powerful role in the world oil market.

And, now, we learn that Ukraine is under more pressure from the Russian Ruble than through the threat of Russian tanks.

“The ruble’s creeping advance shows how the troubled regions are slipping further from the government’s grasp … The precedent in ex-Soviet countries from Georgia to Moldova shows that similar shifts can help entrench pro-Russian insurgents.”

Widespread use of currency is a sign of sovereignty over that nation. “The increasing use of the ruble is yet another sign Russia’s going to keep de facto sovereignty over the territory it and the separatists control … Georgia’s breakaway regions of Abkhazia and South Ossetia, where Russia has backed separatists for years, use the ruble as their main currency … Russia introduced the ruble in Crimea shortly after annexing the Black Sea peninsula from Ukraine last March.”

Currency use is the key to eventually determining which country rules another. In Ukraine, the Russian Ruble is steadily encroaching upon the Ukrainian Hryvnia … the ruble is replacing the hryvnia and backs setting a timetable for a full switch, like in Crimea.”

Soon, Ukraine is going to collapse, or threaten to do so, and Russia will step in to win this struggle without the major conflict with Western powers so many fear-mongers have long been predicting. At that point, Ukraine will disappear into Supernation #5 of the Club of Rome Plan.

The timetable for Antichrist’s appearing will have moved forward significantly, as another of the prophesied and planned ten supernations will begin operating on the world’s scene.

Christian, it is time to look up and rejoice. Fulfilled prophecy proves that our Redemption is drawing nigh!